The Stirling Constituency Labour Party (CLP) have today unveiled the candidates who will stand in the 2017 Local Authority Elections in the Forth & Endrick and Trossachs & Teith wards.   Richard Simpson and Gerry McGarvey will be taking a Labour message out onto the doorsteps of West Stirlingshire

In Forth & Endrick, local members have chosen Dr Richard Simpson to be their candidate.  Richard served for thirteen years as a Member of the Scottish Parliament;  as a Justice Minister in the first parliament and over the last nine years a shadow Public Health Minister. Richard is a former GP and a current Honorary Professor at Stirling University in the Faculty of Health Sciences and Sport.  He’s a former Chairman of Strathcarron Hospice and a current trustee on the Guardians of Scotland Trust. 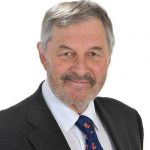 I’m delighted to have been selected to stand in the Forth & Endrick Ward and I know that my experience both as a GP and as an MSP will be invaluable in helping both patients and constituents.  We need a focused approach to tackling health inequalities and fuel poverty and realise that our local communities have unique concerns over issues including broadband and public transport.  I’m looking forward to being a strong voice for the many diverse and proud communities here in West Stirlingshire.