The Stirling Constituency Labour Party (CLP) have today unveiled the four local members who will stand in the 2017 Local Authority Elections in the Stirling East and Stirling North wards.  Chris Kane and Jennifer Preston will join existing councillors Corrie McChord and Danny Gibson on the campaign trail. 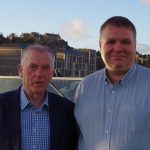 In Stirling East, Corrie McChord and Chris Kane will take a Labour message out onto the doorsteps of Braehead, Broomridge, Hillpark and Whins of Milton.

Corrie McChord is a veteran of local politics who in 2016 marked thirty years as a local councillor, having first been elected to the then Stirling District Council in 1986.  Corrie, was born in Stirling and currently lives in Hillpark and has represented Stirling East since 2007.

Chris Kane is the Chairman of Braehead Community Council and Braehead & Broomridge Community Development Trust. A local businessman, Chris lives in Braehead with his wife and their two young children.  Chris says,

“As a community activist I’ve been working hard in recent years to create tools and resources to help me a difference in my neighbourhood.  I’ve set up the Braehead & Broomridge Community Development Trust and we’re currently asking “what’s next” after the remarkable success of our first project, the Braehead Community Garden.  I have a track recorded of delivering for my community and I know I can do more as a local councillor.” 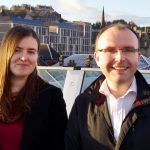 In Stirling North, Danny Gibson and Jennifer Preston will be flying the Labour flag in the all-new 4 member ward which comprises Blairlogie, Cambuskenneth, Causewayhead, City Centre, Cornton, Forthside, Raploch, Riverside and the University campus.  Danny currently represents Stirling East on Stirling Council where he also serves as Environment Convenor. He lives in Riverside with his wife and young son. Danny said:

“As a local resident myself I am looking forward to engaging and working with all the distinct communities within this new ward to keep improving our local area.”

Jennifer Preston is a new face to local politics.  Jennifer lives in St Ninians with her partner Lawrence and is an Area Sales Manager for a manufacturing company.  Jennifer says,

“I’m standing as a councillor because I want to use my experience in business to make Stirling an even better place to live and work. Housing is a particular passion of mine: I believe everyone deserves a decent roof over their head and I’ll work hard to build on what the current Labour administration have already delivered. I believe effective local government can make a huge difference to people’s lives and I’ll make it my priority to get things done for the people of Stirling.”