Scottish Labour members in Forth and Endrick have selected former Provost Colin O’Brien to contest the ward by-election on 6th May.  Colin was formerly a Stirling Councillor from 1999-2012 in Forth & Endrick and Provost from 2003-2007. 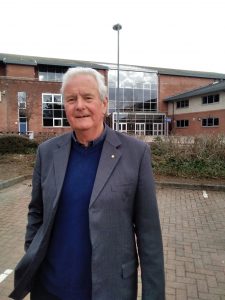 Colin has lived in Drymen for 36 years and has always played an active role in his local community and across the wider district.  He is a former Depute Convener of Loch Lomond and the Trossachs National Park; former Vice Chair of Mugdock Country Park; former Chairman of the Stirling Smith Art Gallery and Museum; and former board member of Rural Stirling Housing Association.  Colin is a retired High School Headteacher and continues to serve on Stirling Council’s ‘Children and Young People’ Committee, where he is the Church of Scotland representative.   This year Colin retired from his role as one of the Queen’s Deputy Lord Lieutenants for Stirlingshire.

“I regret the circumstances which have caused this by-election.   Despite political differences, Graham Lambie and I worked harmoniously over a number of years.   Now in these uncertain times our community must choose a new elected representative.  I am glad to be able to offer my experience and knowledge to fight again for our important local issues, like increased rural roads spend; imaginative improvements to public transport; a modest supply of affordable homes; another look at the brown bin charge; more support for communities and green issues.  I believe the outcome of this election is wide open and in the end it is the voters who will decide the result.”

‘We’re absolutely delighted that Colin has decided to once again step up to ensure that Forth and Endrick will have a local champion on Stirling Council amplifying the voice for the unique challenges and opportunities across the ward.  Colin is the real deal for Forth and Endrick;  he has an immense track record of success no candidate can come close to matching and he brings a breadth of knowledge on everything from rural housing to education and much more in-between.’

Voters go to the polls in the by-election, and also the Scottish Parliamentary elections, on Thursday 6th May.  Scottish Labour’s candidate in the Holyrood election is Stirling Councillor Chris Kane.