Scottish Labour’s candidate in the 2021 Scottish Parliament Election in Stirling is Chris Kane.  Chris (44) is a ‘Son of the Rock’, having been born in Stirling where is still lives with his wife and two children.

Chris is well known within the constituency where he was a former Stirling Observer columnist and Central FM Breakfast show presenter.  Since 2017, he has been the Scottish Labour Councillor in the Stirling East Ward.

Chris’ route into politics was a community one – he was a community councillor before setting up a Community Development Trust to deliver assets within Braehead and Broomridge, including the hugely successful ‘Braehead Community Garden’. 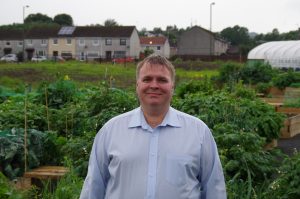 ‘I was born and raised in the constituency and this is where I’ve chosen to raise my family.   I’m working hard to build stronger communities, tackle inequality and reduce poverty and I’m looking forward to engaging with voters across Stirling between now and the Scottish Parliament election in May.’

‘As a councillor, I am fed up with the SNP Government running roughshod over our local communities and ripping the heart out of Local Government funding and I want to go to Holyrood to say enough is enough.  I want to do all I can to strengthen and empower Stirling’s many diverse communities and if elected I’ll be a strong local voice at Holyrood and a true champion for everyone across the constituency.  If you want to tackle inequality, reduce poverty and empower local communities, let’s do it together and it starts with a vote for Chris Kane and Scottish Labour in May.’

‘Chris has been active in Stirling’s politics for many years, securing resources for his local community as far back as 2013 and, since 2017 as an elected member of Stirling Council, he has protected services we all depend upon.

During this pandemic Chris has continued to work for the benefit of all his constituents. Because of his demonstrated ability, our local party unanimously chose him as our candidate in the May election. I firmly believe the electors of Stirling can put their faith in Chris to deliver on their behalf and together with our entire membership, I look forward to campaigning alongside him to secure a Labour victory in May.’